Knowing the rules is part of any game. Wanna play baseball? You have to know the rules. Darts? Pretty important to know what you can and cannot do. Duck hunting? No different.

In the world of the waterfowler, knowing the rules is a critical part of the equation. You need the proper paperwork, including a federal duck stamp. You must use federally approved, non-toxic shot and a shotgun plugged to hold no more than three shotshells. You can only hunt between a half hour before sunrise until sunset. And that’s just the beginning.

Daily bag limits, too, are certainly part of the rules. For instance, you can shoot X number of birds per day, and of those, only Y can be mallards. And of those mallards, no more than Z can be hens. One pintail. Two bluebills. Three wood ducks. Two canvasbacks. On and on. The specifics often depend on your geographic location, as limits and details typically vary from flyway to flyway.

With all that in mind, you can see how important it is to know exactly what you’re shooting before you shoot. To help make this process of duck identification a little easier, I’ve distilled telling this duck from that duck into a handful of different categories.

This is the first in a two-part series on duck identification. In this first part, we’ll go over the differences between dabblers and divers, plus how to use flight details as well as size and shape to better tell what kind of duck you’re looking at.

There are two main families or groups of ducks found in the United States: The dabblers (aka the puddle ducks) and the divers (also called diving ducks).

These are the dabblers:

These are the divers: 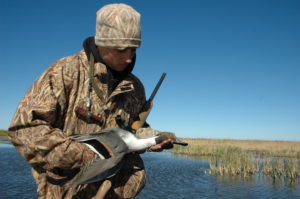 How big or small a duck appears at rest or in flight can be a qualifier. Here are some examples:

How a duck or flock of ducks moves in the air is yet another aid to identification. The key here is mainly to watch and learn, but here are some examples:

These are just a few of the details every good ’fowler needs to know to identify ducks and have a successful hunt. For more information on duck identification, including habitat, sound, silhouette and color, check out part two of this duck identification series.

– A hunter’s guide to waterfowl guns and ammo
– Hunting gadwall ducks: Everything you need to know
– 9 things every new duck hunter REALLY needs: Resources and gear
– Why these waterfowlers love the cutdown call for duck hunting
– Beyond the quack: Learn the different duck sounds of common species
– Top 5 duck and goose decoy spreads you have to try