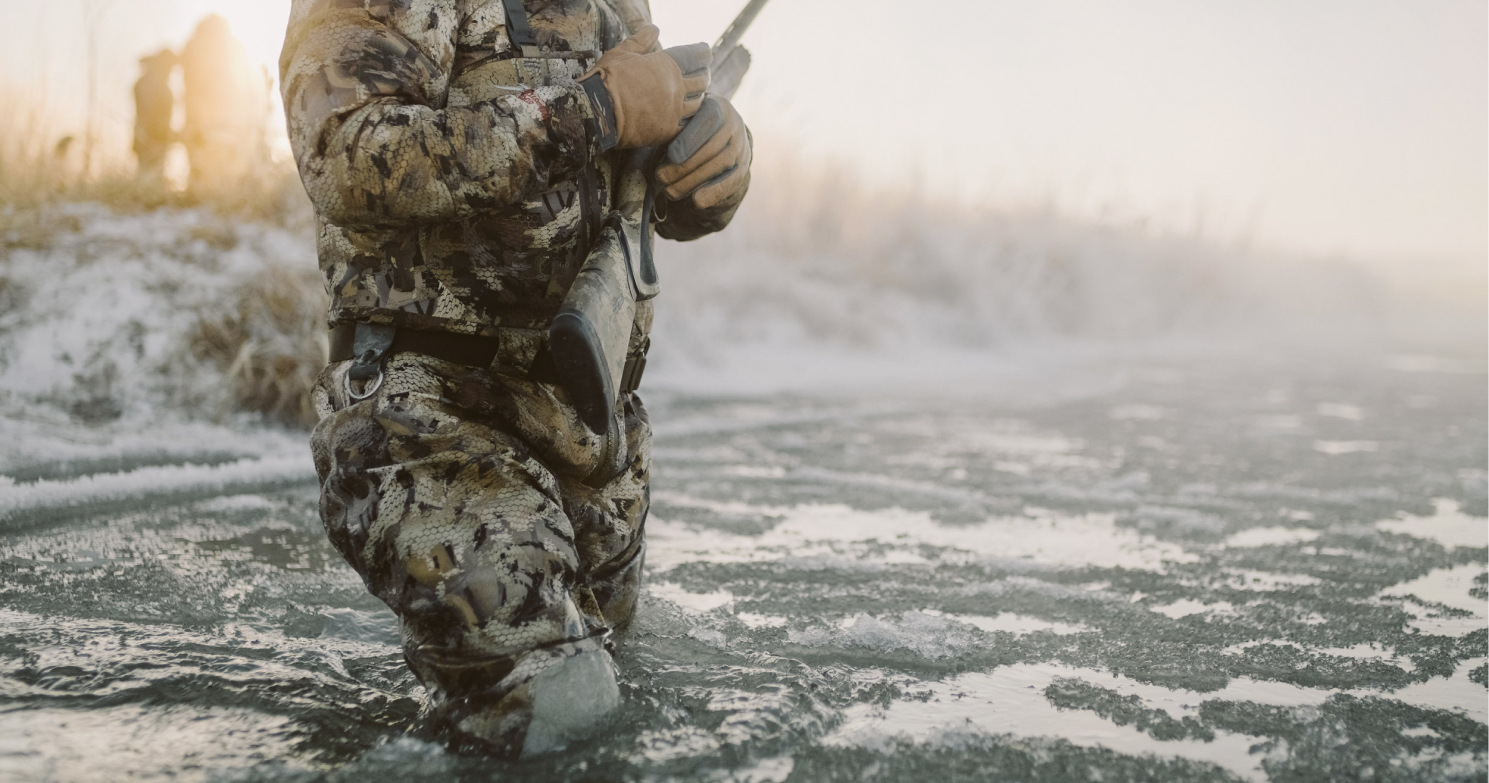 First rattle out of the box, let me start with a disclaimer. I … myself … me … am NOT a well-dressed duck hunter. Oh, I’m warm enough. And dry. And hidden. But well-dressed? I certainly wouldn’t say that. I have the clothes and gear to be considered well-dressed, but am I? I repeat — I am not.

So let’s back up just a minute. How is it that I’m writing about the well-dressed ’fowler when I, by my own admission, am not of that clan?

To explain, I know how to be well-dressed. However I have, over the past few seasons, settled on an “outfit” that serves me well afield. And … she’s ratty and old. In fact, the polypropylene shirt I wear on each and every hunt just turned 31 years old. That’s older than most of you reading this. The socks? Old. Long underwear? Older still. Same with the Wind Tamer fleece pants, the turtle neck, the Drake long-sleeve pullover and the damn near sleeveless Habitat Flats hooded sweatshirt.

The only thing new are my waders and, occasionally, the Banded rain jacket or Sitka Boreal Aerolite coat. This is, after all, the Pacific Northwest. You know — nine feet of rain annually. Yeah … that.

But my partiality to old, tattered ’fowling clothes aside, there definitely is something to dressing the part that plays a role in successful duck hunting. Proper field attire keeps you comfortable — be it warm or cool, depending — hidden and dry, while allowing for the freedom of movement ’fowlers need in order to perform well behind the shotgun. Proper clothing keeps hunters in the field longer, where they stand a much better chance of putting birds on the strap as opposed to, say, from the sofa, eh? 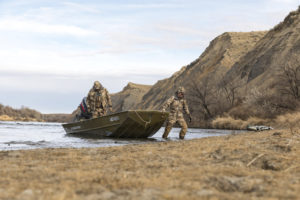 What, then, does the well-dressed duck hunter wear into the blind? That depends on where the hunter is, how he’s hunting (a layout blind in cut corn versus a layout boat in the middle of the Mississippi River, let’s say) and, perhaps most significantly, what the weather is for the day, the time of year and the part of the country being hunted.

To put it personally, I’ve hunted Missouri blue-wings in 80 degrees, and Iowa mallards in minus 8; however, and generally speaking, the well-dressed ’fowler’s wardrobe might look something like this.

This one’s actually quite easy. Ms. Google tells us that anywhere from 10% to 40% of the body’s heat is lost through the head. For our purposes, we’ll split the difference and say 20%. That’s a bunch of body heat going to waste.

As for hands and feet, while there’s not as much warmth lost through them, when one or the other — or worse — both are cold, well … it’s going to be a long, long day.

If it’s warm, I’m wearing a traditional ball hat, both for the shade and to keep the rain off my glasses. That is, unless I’m in a layout blind, where the longer bill of a ball hat is constantly in the way.

There are short bills that work then or, if it’s a little cooler, I’ll switch to a light knit cap (watch cap) that incorporates a short bill. Best of both worlds there. Colder still, and I’m a huge fan of toboggan-style caps. Synthetic works just fine; however wool is even better, as it stays warm when wet.

To be honest, I very seldom wear gloves while duck hunting. One, gloves can deaden or change the sound of a call, and I don’t want that. Two, I’ve found very few gloves I can wear and feel comfortable shooting in. That said, I’ll often don a pair of brown jersey fingerless gloves — 99 cents! — both for a little warmth and to cover/camouflage my hands. These don’t interfere with my shooting.

And finally, feet. Here, my suggestion is to get the best socks you can afford. I’m partial to mid-weight calf-high socks from either Farm to Feet or Minus33. Yeah, $20 for a pair of socks might seem like a lot, but trust me — the quality, not to mention the remarkable warmth of Merino wool — will be worth it. Comfort, too.

The perfect house begins with the right foundation. So, too, does staying warm and comfortable afield. Introducing the base layer …

Commonly known as thermals, it’s a blend of polyester and cotton that’s lightweight, warm and thin enough to allow one to build upon that bottom layer easily and comfortably, without feeling too bulky. And the cost of quilted thermal? In most instances, $20 to $40 will cover it; unlike much of today’s high-tech apparel, crafted using materials I’ve not heard of and costing more than $100 for one piece.

But there’s wool too. It’s a bit more expensive and requires a little more care during the laundering process, yet for some it’s an excellent choice. Synthetics, too, are an option. Again, a bit more costly, but perhaps worth a try. 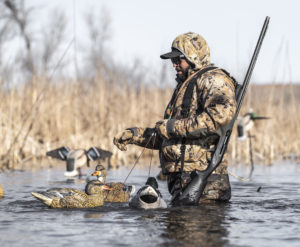 My favorite mid-layer is the Drake MST (mid-season) pullover I wear between my thermal base layer and my tattered wreck of a hooded sweatshirt.

A mid-layer, then, is just as the name implies: a medium to medium-heavy garment worn between the base/skin and the outermost apparel, be it a vest, jacket or rain gear.

Again, I’m not looking for anything too bulky, but — and as the Drake gear does so well — I want a layer that not only addresses the temperature (i.e., the cold), but perspiration and wind as well. Believe me — I’ve tried a thousand and one different pieces of clothing, and this Drake gear (with what the outfit calls “Eqwader Technology”), truly gives me everything I’m looking for, be it early October or mid-January.

Here we are again, using the home construction analogy: This is the shingles and the siding, otherwise known as outerwear. You know that if the roof leaks, the interior of the home suffers water damage. If the siding fails, same story — damage and costly repairs.

Maybe that’s a little melodramatic. Still, it’s the outerwear that locks everything in place and brings it all together. It’s the outerwear that provides that much-needed protection from the elements, be it cold, wind, water or all three. It’s here where I’m spending my money, as I want the very best I can afford.

And here, it all depends on the weather. High 30s, with wind but no rain, and I’ll have an older style Browning goose down vest over the top of the aforementioned MST pullover. Incredibly warm, my vest sports Mossy Oak’s 2007 Duck Blind camo pattern — perfect for hiding the three-inch red suspenders holding up my Windtamer britches from Mack’s Prairie Wings.

Throw some rain into the mix, and I’ll slip a Banded Feather-Stretch Shell Jacket over the top.

The problem with rain gear, I’ve found, is it’s often bulky and cumbersome, with marginal flexibility and freedom of movement. Oh, it keeps you dry, but shooting — and shooting well — can become quite the challenge. I don’t have this problem with the Feather-Stretch, and I’ve taken to wearing the jacket across the board, whether hunting, fishing, clamming, crabbing or anything outdoors.