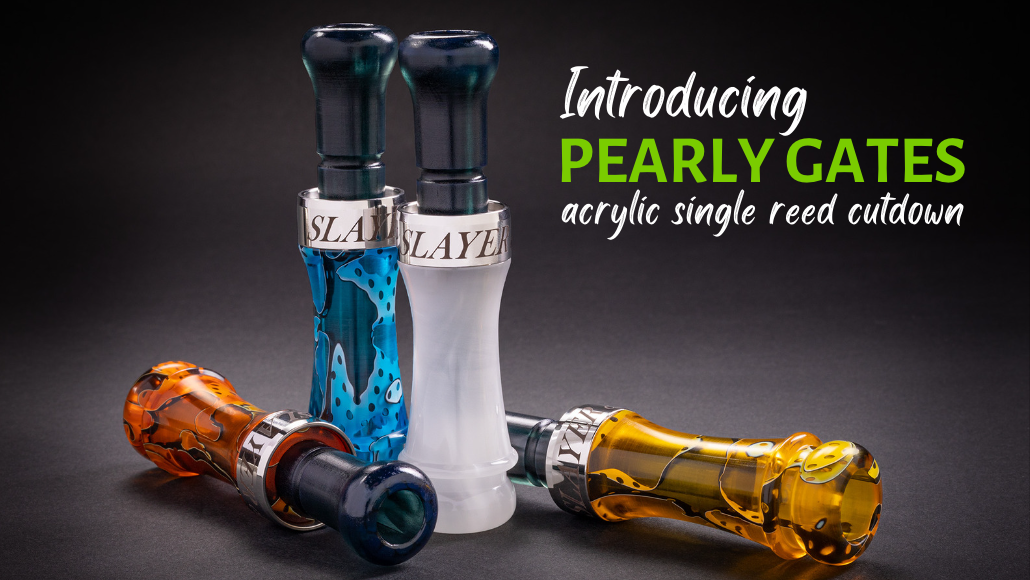 Waterfowlers facing wary ducks and competition on public land have a mid-season savior to help them stand out: the new Pearly Gates acrylic cutdown duck call.

“The feed call on this cutdown gives out that traditional squeaky chatter that sounds like a hole full of mallards,” said Bill Ayer, CEO of Slayer Calls. “If you’re hunting high-pressure areas and you need a call to differentiate you from the rest of the pack, this call will do it.”

For duck hunters frustrated with flocks landing in the decoy spread downstream, the Pearly Gates acrylic cutdown duck call creates realistic, in-your-face sound that birds can’t ignore. We’re talking the classic loud, high-pitched barks that cutdowns are known for. But unlike other cutdown calls, the Pearly Gates can show a softer, quieter side.

“What makes this call unique is that we pulled tested-and-proven technology into the tone channel that allows the call to get quiet, so you can also be subtle when you need to,” Ayer said.

The Pearly Gates gives waterfowlers a second new call in the Slayer Calls lineup for the 2022-23 duck season, following the release of the open bore Ranger Single Reed mallard duck call in September. The Pearly Gates is also the company’s second cutdown call; the double-reed Slayer CUTDOWN 00 debuted in 2021.

The Pearly Gates single-reed acrylic cutdown duck call comes in white pearl for $134.99, with customized engraving available for an additional $30. Holiday shoppers can order the Pearly Gates to arrive ahead of Christmas.

About Slayer Calls: CEO Bill Ayer founded Slayer Calls in 2018 in Eagle, Idaho. The longtime hunters and expert callers at Slayer are obsessed with crafting the best duck, goose, turkey and elk calls, all made in America. Slayer gives back to conservation and preservation efforts by donating 10% of every purchase.