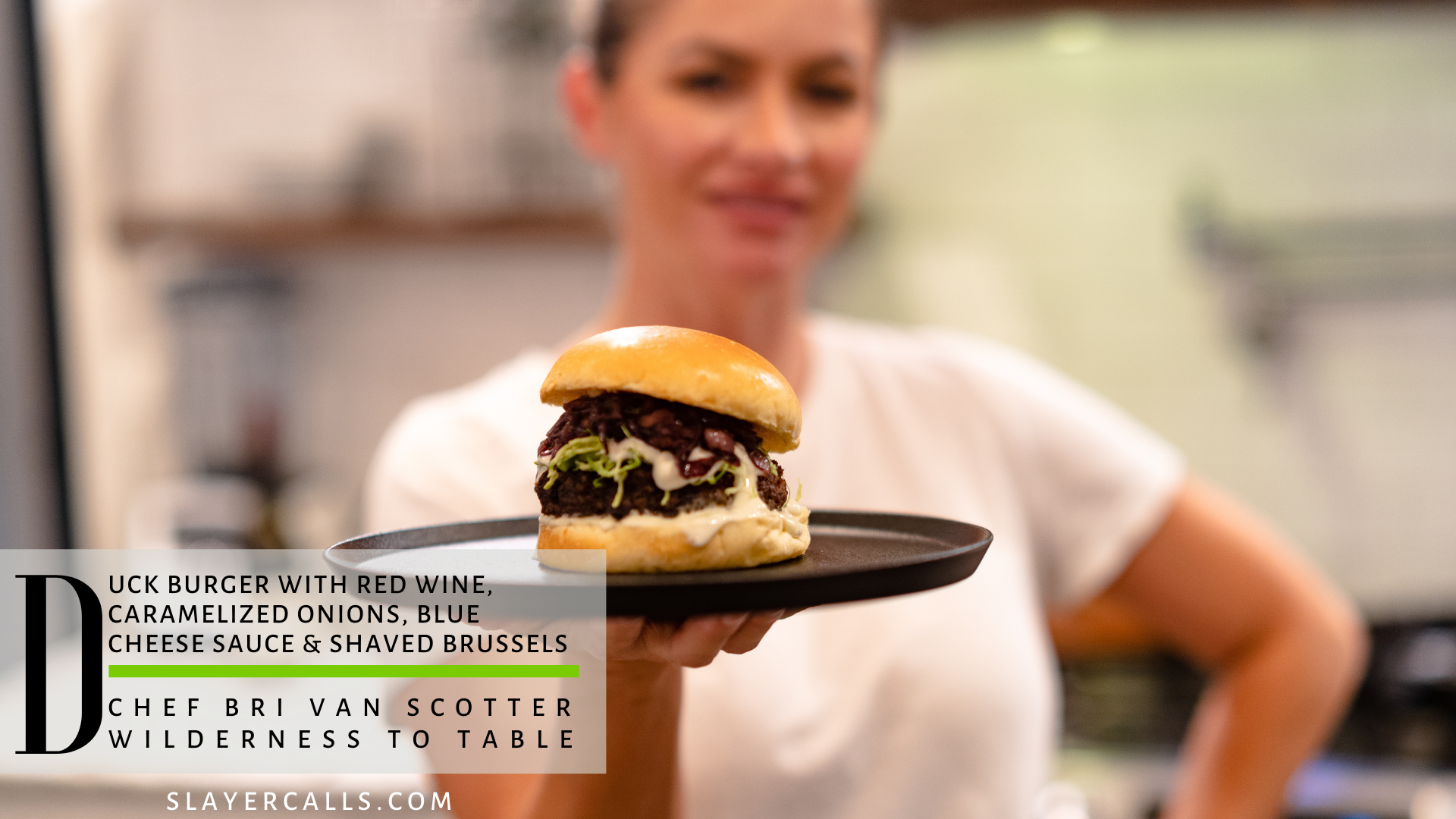 After a busy week, nothing beats a tender, juicy burger, hot off the grill. Except, maybe, this fresh and delicious take on the American classic, made with ground duck meat, red wine caramelized onions, blue cheese sauce and a Brussels sprouts slaw.

Part of what makes this burger so uniquely delicious is how it’s cooked — which, by the way, isn’t on a grill at all. Instead, this recipe calls for cast-iron cooking. 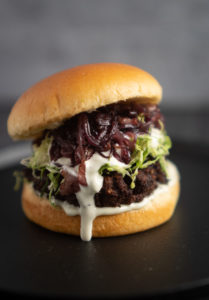 It starts with the onions, which are caramelized over medium-high heat in a mixture of unsalted butter and red wine. I recommend using a cabernet, which is known for its savory, dark-fruit flavor. Foods with a high fat content pair best with a cabernet sauvignon, so don’t worry about trimming your duck thighs prior to grinding.

Once your onions are soft and seasoned, it’s time to fry up your duck burgers. This is one of the benefits to cooking in a cast-iron skillet, as opposed to the grill. Rather than losing all those delicious juices to the coals, your freshly ground and seasoned patties will continue to marinate in the pan, even as the meat is cooking.

You’ll notice that this recipe calls for pancetta as well as duck meat. You may be wondering if it’s alright to leave that out, but we recommend you don’t. Pancetta is a seasoned, salt-cured meat made from pork belly. And as such, it adds a spectacular salty-sweet flavor to the ground duck. Plus, the pancetta also increases the fat content of the meat, which, as you might recall, pairs particularly well with those cabernet-caramelized onions.

If you’re struggling to find pancetta at your local grocery store, you can substitute it with an equal helping of bacon, depending on how rare or well-done you like your burgers.

Serve this gorgeous burger with a side of roasted potato wedges and mixed greens, tossed with balsamic vinaigrette. And don’t let the rest of that cabernet go to waste — this is one Friday night dish that deserves a toast.

Ingredients for duck burger and sauce with shaved Brussels sprouts

For the duck burger:

For the red wine caramelized onions:

For the shaved Brussels sprouts:

For the blue cheese sauce: 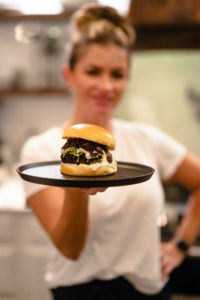 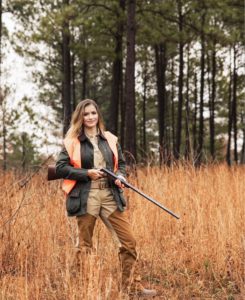 Bri Van Scotter is a professional Chef & Pastry Chef who turned into a hunter to source the purest proteins possible. She is creator of Wilderness to Table, a Television Host, Author and a hunter who is on a mission to prove there is more to wild game than grilling a backstrap!

How to hide with a blind: 5 waterfowler tips for blending in better
January 19, 2022

How to hide on the hunt: 3 common hunting pitfalls and how to fix them
January 19, 2022

Target acquired: Everything you need to know to hunt widgeon
January 5, 2022