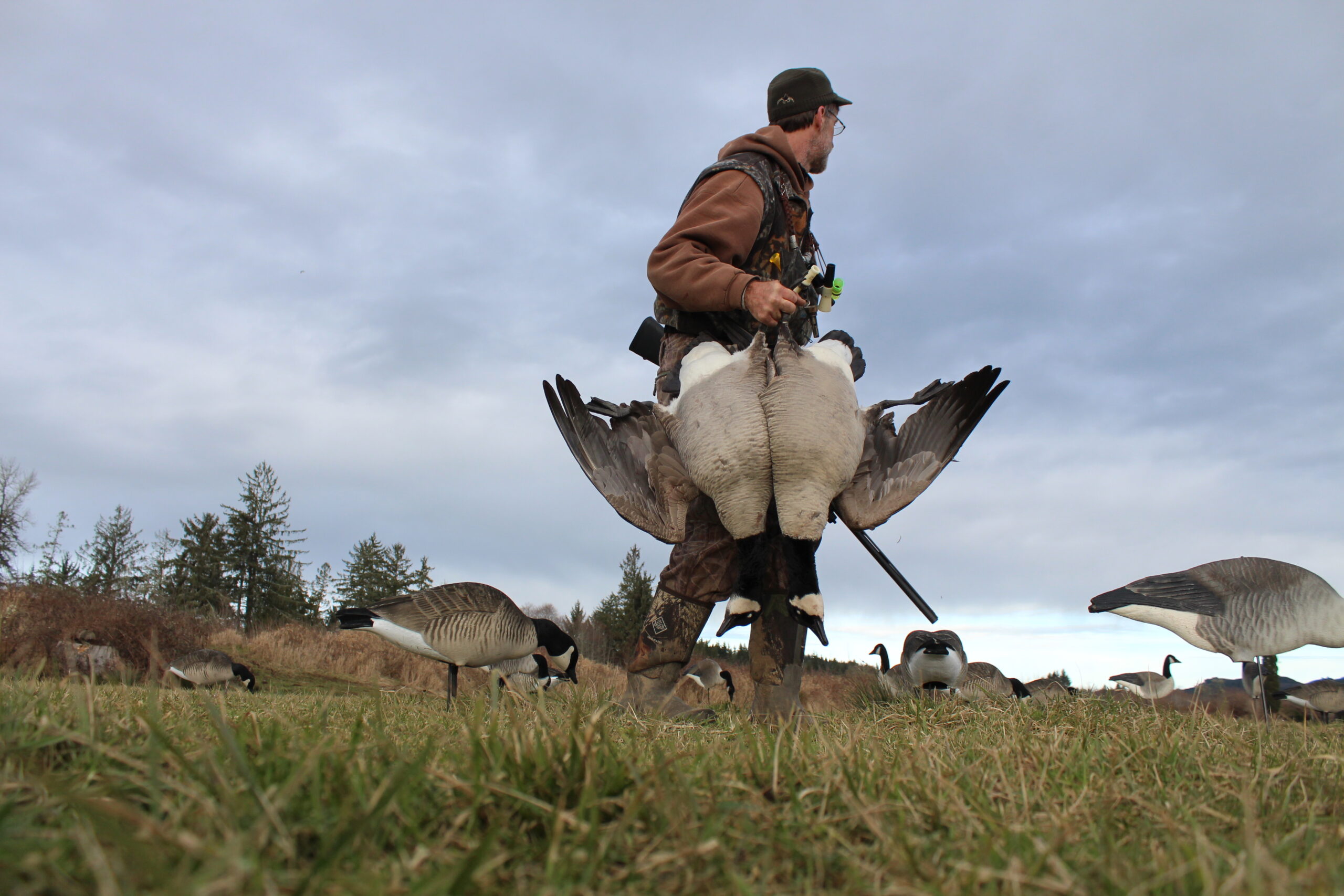 I’m not saying September Canadas are push-overs, though often they can be — unaccustomed as they are to plastic representations of their friends and neighbors, folks hiding in the bushes with ill intent, and … well … gunfire.

What I am saying is that throughout the fall, geese become wise to the ways of us ’fowlers. So by the time the season ends, be it late January, February or even early March, those Canadas still around have been well-schooled in the art of — sorry, Gibb Brothers — staying alive.

But are they impossible, these late-season veterans?

Challenging? Yes. Frustrating? Often. But impossible? On any given day, it might seem as such. But of course they’re not really wraiths designed to give you the slip at each and every turn. No, hunting late-season Canadas can be done successfully. One just has to delve a little deeper into the ol’ bag of tricks. And read on. 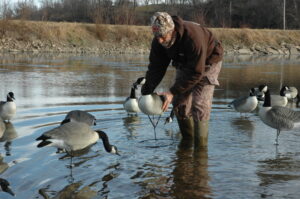 Tips for hiding during the final days

Come late January, there are two types of Canada geese: dead geese and wise geese. Very wise geese.  That’s why, when talk turns ’round to geese, your first thought should be blinds. After all, if you’re not hiding, you’re not shooting.

During these late hunts, I use one of three methods of concealment: layout blinds, ghillie suits, and natural blinds.

Though not a new invention, layout blinds are my go-to. They’re lightweight, low-profile and mobile. Currently, I use two — a full frame Avery Ground Force (17 pounds) and a frameless Avery Power Hunter (11 pounds). Both wear a foundation of mixed tan and green raffia grass, covered with an intermittent layer of natural vegetation.

My objective when grassing a layout blind is to match exactly the surroundings. Too often, I see ’fowlers over-stubble their layouts. That, or the natural cover added is too uniform, without the haphazard and random here-and-there look that’s created by Mother Nature.

Is it really that important to be so Type A with the layout blind? I believe so. Remember, these geese have been hunted for almost five months now. Those that have survived are masters at recognizing and avoiding potentially life-threatening piles of stuff. So make it look uber-natural.

A good layout blind benefits from strategic positioning. Set up your blind in a somewhat untraditional position in relationship to the wind and the decoy spread. I prefer to quarter my blind(s) to the spread and the wind; that is, so my guns are shooting left-to-right or right-to-left. Set so, the birds are looking at the spread and where they’re going to land, versus staring at the guy next to me who can’t keep his face hidden.

A couple quick words about the remaining two methods of concealment: ghillie suits and natural blinds.

Ghillies, like the Ultralight Ghillie Poncho from Miles Tactical, can work incredibly well under the right conditions (i.e., some natural cover). Certainly ghillies can provide excellent concealment in great, wide-open spaces, such as a short-cropped pasture or winter wheat field, but we’ve had our best luck using them in conjunction with some nearby naturally occurring cover.

Something to consider: Shooting while wearing a ghillie can be quite challenging. Often, I’ll simply drape the poncho or jacket over my shoulders, shrugging it off as I mount the gun. It does take practice.

As for natural blinds, when they’re available within effective range of your spread, and they offer complete concealment (including overhead concealment), they’re excellent options. However, finding the perfect natural blind is often difficult, if not impossible. My advice? If you have it, by all means use it; if not, consider a portable layout blind or ghillie suit.

Now let’s talk about decoys when hunting late-season Canadas. First, if you’re targeting cacklers or hunt where cacklers are the predominant subspecies, then (1) buy 500 minimum cackler decoys and learn to set them yourself; or, better, (2) buy 500 cackler decoys, find two friends — each with 500 cackler decoys — and set them all up in a space about the size of a traditional living room.

Yes I’m joking, but only slightly. Cacklers, for those who haven’t targeted them, are a bird in and of themselves. The recipe for success is a lot of decoys, lots of skilled calling, invisible blinds and a love for frustration verging on madness. Yeah, I went there.

Your second tip, and what I do, is target the big western subspecies during the late season. I understand; sometimes, one has choices. Other times, not so much. And I’m not insinuating that the big westerns are dumb. Oh, no. However, I do find them more accommodating than any of the smaller subspecies, especially when it comes to decoys and calling. 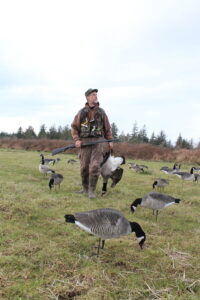 As I write this (January 13), my goose spread consists of 18 Greenhead Gear Pro-Grade honker full-bodies in a 2-to-1 ratio, feeders to sentries/actives.

I set three — one active and two feeders — 15 to 18 yards downwind (if I have any wind) and at 10 o’clock to my blind(s). These give the impression of geese just landed and walking into the main group of birds.

Approximately 18 to 20 yards upwind of those, and directly in front of the blind, I’ll arrange the remaining 15 full-bodies in a loose crescent, with plenty of space between feeders and with the actives roughly on the corners.

For reasons known only to them, the geese I target do basically one of two things when finishing to the described spread. Either they’ll land slightly above the three but on the outside edge (NOTE: I keep the decoys close, so when this happens, the birds are still well within range) or they’ll light just above the crescent in the middle. Regardless, they’re close; and as 95 percent of my hunts are solo hunts, that’s right where they need to be.

That sample spread will dwindle in size as the regular season comes to a close in late January. By the time the season winds down, I’ll be setting just six to eight full-bodies; still in the 2-to-1 ratio (feeders-to-actives), and in a rough 15- to 20-foot diameter circle.

Rough is the key word here; precise placement isn’t important. What is important is to know that come late January, these big Canadas have paired up in preparation for breeding. This means that geese on the ground are relatively aggressive and territorial, both amongst themselves and to birds in the air. Birds in the air, likewise, are standoffish; they want the company of their kind, but at a distance.

So, and while others’ field research may prove differently, my time in the blind has shown me that yes, some late Canadas will work a small decoy spread like it was November; however, many will want to be gregarious, yet land 30 to 50 yards away.

If I see that happening, I’ll move my layout blind 30 to 50 yards downwind of the spread and shoot the birds not feet down, but on the pass. Improvise and adjust is the name of the game when it comes to hunting late-season Canadas. 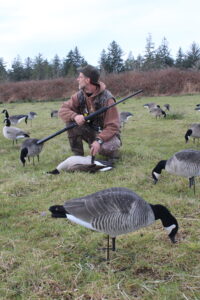 Some notes on calling

Calling? I don’t do much. A honk for attention. A cluck. Double cluck. Cluck-moan. Growls, murmurs and a little ground noise.

Calling during the final days of the season, like concealment, can be challenging. Canadas on the ground will often go silent when other birds approach. If that’s the program, play accordingly. Get their attention with a honk. Keep their attention on the corners with a cluck or cluck-moan. Or better yet, combine a flag with a greeting and let the decoys do their job.

Still better than that, toss an old-school flute call into the blind bag and use it judiciously. Nothing sounds like an old gander than the deep, rich HER-ONK!! produced by a flute call. And given today’s short reed craze, few geese ever hear a flute call. Vocal geese, obviously, would be a contradiction to this mantra of keep quiet. If the birds are noisy, make noise. Again, it’s a game of improvise and adjust.