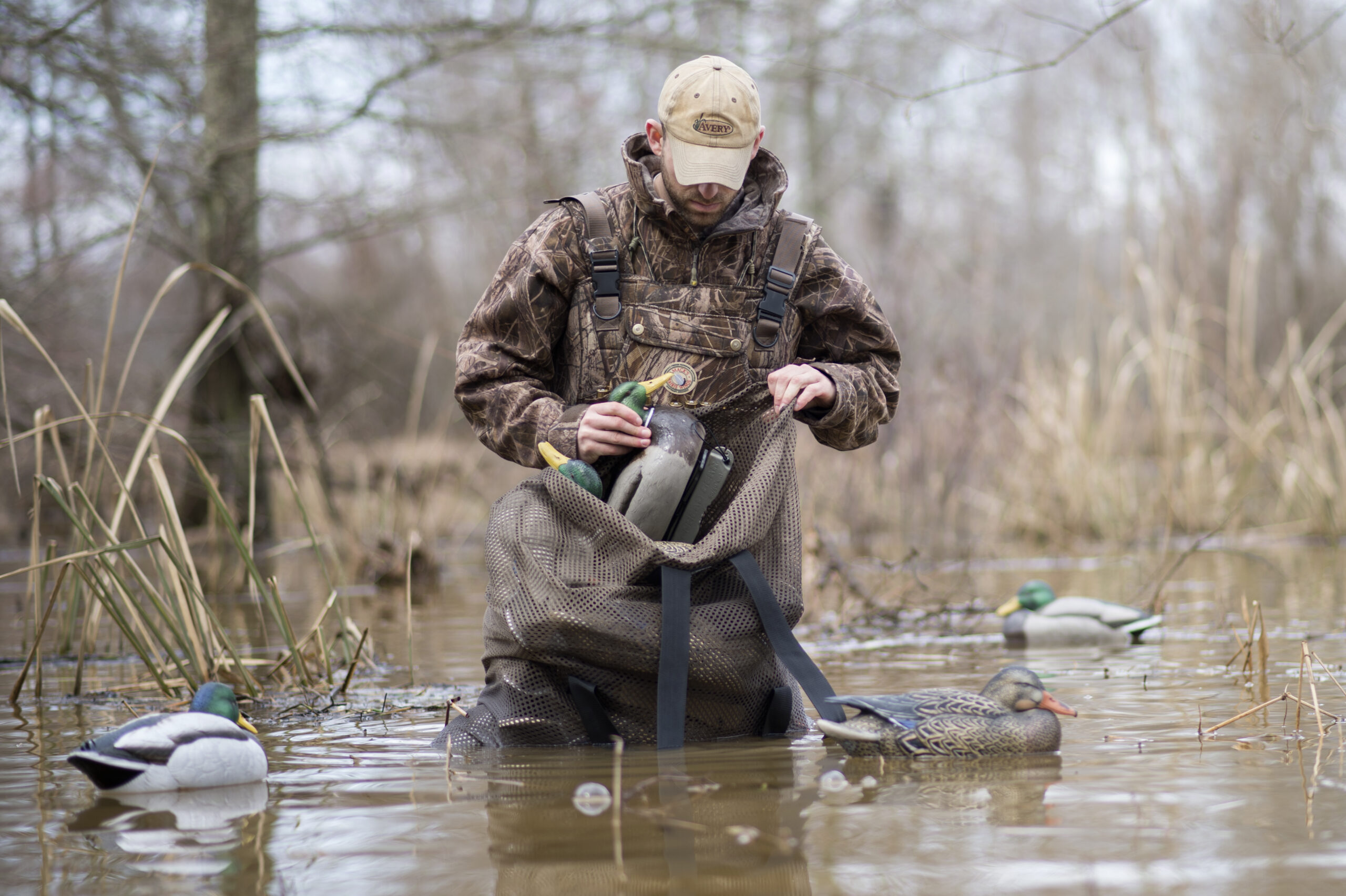 East. West. North. South. Throw a dart at a map of the United States during the month of January, and chances are good said dart has impaled a location where duck hunting is as challenging as it’s been all season.

My point is, with less than a month to go before the curtain falls on the 2021-22 waterfowl books, “gimme hunts” have long become a thing of the past. You’re working for each and every bird. The details you overlooked in October are coming back to haunt you now.

But while January ducks can be difficult, they’re not impossible. With a few tweaks and a major change here and there in your normal routine, you can start putting some weight on that duck strap again. Try these tactics. Invent your own. Do not — I repeat, do not — be afraid to improvise, adjust and adapt.

Years and years ago, Buck Gardner, a genuinely wonderful gentleman in addition to being a champion – and Champion of Champions – duck caller told me something I obviously never forgot. “If,” Mister Buck said, “I had to make a choice between using a duck call and using a jerk cord, I’d take the jerk cord every time.” Now this, remember, is a man who for decades has created, crafted, and sold duck calls for a living. But he’s right. Late in the season, motion in the spread – movement, ripples, waves, something – can be the most important thing to the success or failure of a hunt.

Whistle while you hunt

I’m no prize pig when it comes to blowing a duck call; however, I’d like to think I can hold my own most days. There are times, though, like during the late season, when ducks, and not only mallards but all breeds, seem to be somewhere between leery and downright terrified of a highball. When this appears the case, I cut back on the mallard talk – well-spaced contented quacks and very short low volume greetings only – and switch almost exclusively to a widgeon whistle. Breathy whistles, pintail trills, green-wing peeps; something other than your run-of-the-mill quacks.

Luke Clark, a young waterfowler who works with Matthew Cagle and Matt’s Rig ‘Em Right Waterfowl outfit, perhaps said it best. “You can run the prettiest decoys on the planet,” he said, “be that 100 or two, but if you’re not hidden well, they might as well be painted blaze orange. If you want to be successful, hide first. Decoy placement is indeed important. Scouting reveals all the answers. But,” he continued, with words of wisdom beyond his 27 years, “if you’re not hidden, you’re not shooting.” And it’s just that simple. You. Have. To. Hide. Stand back. Look at your blind. Touch it up where necessary. Cover the dog. Cover the thermos. Pick up your empties. Mediocrity is not an option here. 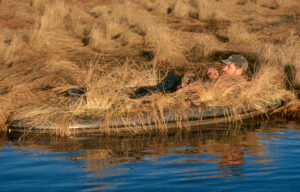 Wrap yourself in grass

What I’m talking about here is leaving your traditional field blind behind, be it a box or fenceline or layout or pop-up, wrapping yourself in a ghillie suit or poncho, and becoming part of the environment. The farther you set yourself from what ducks see as possible places of predator concealment, the more likely they are to commit to a spread, and often without hesitation.

Ghillie suits are not a cure-all. They don’t work perfectly all the time; nothing does. But when ghillie suits work – Man, is it incredible. Personally, I’d recommend a full-length poncho style ghillie, as it offers more complete concealment afield. Choose a color pattern that best matches the habitat in which you spend most of your days. And remember to hide your head, your hands, and face. 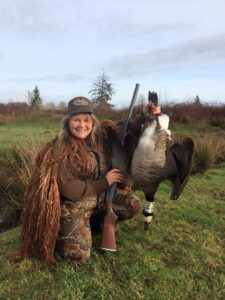 When running mallards late, I do set more hens – two-to-one or three-to-one – than I do drakes. January, and Mister Greenhead is looking for love. Lots of love. Do I have scientific or biological evidence that hen decoys attract drake mallards more efficiently than do drake decoys? Nope; however, it makes sense to me when you understand the drake mallard’s propensity toward wildly open relationships and/or polygamy. And what’s it hurt? From a distance, all decoys, regardless of sex or species appear black; that’s what initially catches the birds’ eyes. But when those drakes get closer, look down, and see 12 girl-ducks and only three boy-ducks?

How many times have you watched birds work and work, only to hook one last time before landing 200 yards away with a knot of coots? Why coots? For one, it’s the constant motion within a flock of coots, no matter how small a group. So here, a light bulb should come on and a three- or four-coot jerk cord should be in the development and implementation stage.

Secondly, many puddle ducks sit on the fringes of coot flocks and feed on the bits and pieces of vegetation and clouds of aquatic insects stirred up by the fat black birds. It’s how widgeon earned their nickname – Robber – for their habit of lurking and scarfing up the unearned spoils. Late season, I won’t hesitate at all to throw out 12 to 18 coots, two or three on a jerk cord, with three or four tight-clustered widgeon off to one side. Maybe a drake pintail or two, just for the white-chested visual. 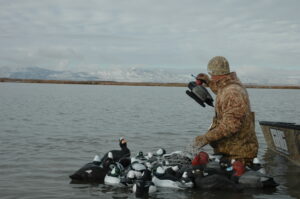 Ducks like geese. And swans. Why? To ducks, geese and swans spell security. High-set watchful eyes, and plenty of them, always on the lookout for danger. Geese and swans also translate into free-floating food, tidbits pulled loose or dislodged by the deep-water feeding habits of the bigger birds. That’s why you often see ducks with geese. And swans. Now I’m not saying to pack a dozen tundra swan decoys into the field, though you certainly can do that. I am saying a dozen Canada floaters set with a tiny (4-6) knot of mallards, widgeon, and pintails placed to one side can be awfully effective. It works in sheetwater, too – 18 to 24 full-body lesser Canadas in 3- or 4- or 5-bird family groups, with six to 12 mallard and pintail full-bodies set 20 yards upwind. 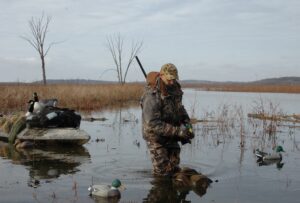