Everything you need to know about turkey decoys 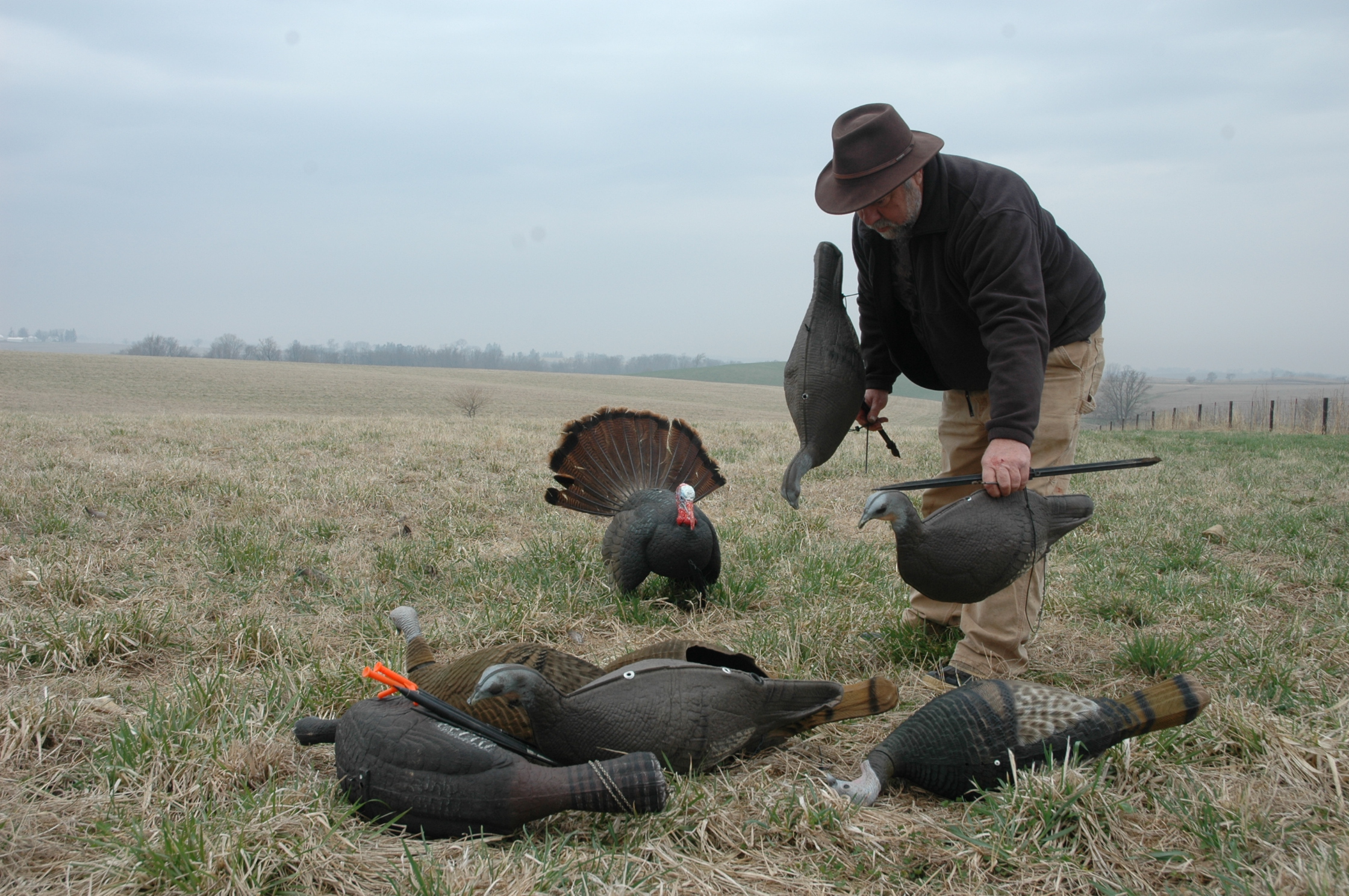 Everything you need to know about turkey decoys

I wish it were so simple. Throw a hen turkey decoy out. Maybe two hens. Sit down. Call a little bit, and get ready ’cause that ol’ longbeard’s coming at a full run — mesmerized, as it were, by that little girl turkey he’s looking at and those wonderful melodic siren sounds he hears. Doesn’t matter that that “girl turkey” is plastic; he doesn’t care. All that’s left is to pull the trigger, high-five yourself, sling ’em over your shoulder and start the walk back to the truck.

Sometimes it almost seems that easy — this turkey hunting game. And what’s behind all this? The decoy, you say? Just stake it out and he’ll come running? That’s true sometimes, but not always.

Sometimes you have to work at it. A little strategy. Finesse. One hen. Two hens. A jake. Jake and a hen. Half-strut gobbler … not a full-strut tom, but half-strut … off to one side. Decoy in full view? Semi-hidden? And which way is “she” — the hen decoy, that is — looking? Away? At you?

This week Slayer Calls takes a look at turkey decoys — hens, jakes, half-strut, full-strut — and how they might be used to better your chances at giving ol’ Mister Tom a ride home in the back of your pickup. 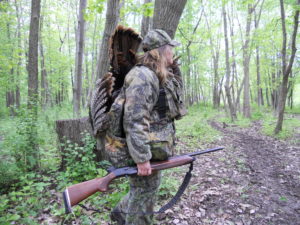 What’s the “right” number of turkey decoys? Like so many situations when hunting, the answer is … it depends. Over the 31 years since I killed my first gobbler, I’ve staked anywhere from none (0) to 12 fakes out in front of my hide.

But, first things first. Why would you want to set a turkey decoy in the first place? With a turkey call, you’re creating an illusion. You’re trying to convince that gobbler it’s a real live sexy hen he’s hearing, and it’s imperative he waddle on over to meet her straight away. Now, the only thing better on his part than hearing a hen is both hearing and seeing a hen. Enter the decoy. Now the illusion is ramped up a notch. Now you’re providing both audio (the call) and video (the decoy), and hopefully completing the illusion to the point that he does wander over.

But wait! Biology now. You see, Mother Nature designed the spring play to work this way: He gobbles, and she goes to him to be bred, build a nest, lay a clutch and propagate the species. That’s the way it’s supposed to work. NOT him coming to her. So we’re hoping for the best here as we deliver a 180-degree blow to Mother Nature.

Which brings us back to our original question: How many decoys? Well, it depends. Let’s take a look at the different turkey decoys and the pros/cons associated with each one. 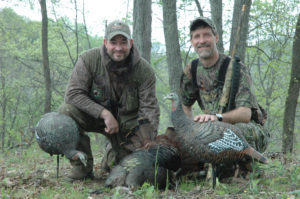 These are probably the most popular and most widely used decoys in the spring. Why? Because they mesh nicely with the sounds we’re making and, as mentioned earlier, they give that gobbler what he expects to see. It all makes sense — most of the time, that is.

Nine times out of 10, when I set a turkey decoy, it’s going to be a hen. Or two hens — one feeding and one looking around casually. It’s what that gobbler expects, and it lends an air of security — Nothing wrong here! — to the setting as a whole. Additionally, turkeys — especially hens and jakes — are gregarious (i.e., birds of a feather flocking together). Thus, one or two hen decoys can attract the attention of a hen or group of hens who have with them a gobbler that, up ’til then, had been ignoring my best yelps and clucks and purrs.

And here’s something a veteran turkey hunter told me years ago: When you set that hen decoy, point her “face” in your direction — not away from you. That way when that gobbler works his way in front of her, showing off just how handsome he is, he’s got to come close … not stand 75 yards away to prance in front of her beady little plastic eyes. True story? I think so, as I’ve tried it both ways and had it work as the old man predicted enough times to be a believer.

The use of jake (year-old toms) turkey decoys is a territorial thing. A dominance thing. No adult gobbler worth his 12-inch beard is going to let any young kid wander around his ground putting the moves on his girls. So, theoretically, when an adult gobbler sees a jake — and hears you making low-pitched jake yelps and clucks — he’s going to scurry on over to assert his authority. Present him with a jake and a hen decoy together, and he’s not going to be able to resist the urge to pummel something. 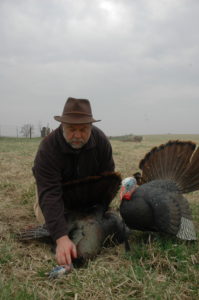 On the flip side of this, we’ve hunted farms that held shark packs — groups of four to eight mean and angry jakes — that have, as a single unit, terrorized even the adult gobblers on the place. In this case, a lone tom coming to a call sees a hen … then a jake … and starts backing away from the setup. He’s afraid, plain and simple. So again, you’re running the risk of your decoy plan backfiring when you set a jake.

Is there an answer? It depends on how well you know the birds you’re hunting. Is there a shark pack or two running roughshod on the farm? Or are the adult gobblers in charge? Here, it’s a combination of decoys, scouting and knowledge of your particular flock(s) of birds that pave the way to success.

Half- and full-strut gobbler decoys

Here again, how well do you know the birds you’re hunting? Like jake decoys, half- and full-strut gobbler decoys can be ridiculously effective with the right dominant bird. I’ve seen it dozens of times: That ol’ gobbler’s head turns snow-white upon him seeing that full-strut decoy. He squares his shoulders — Do turkeys have shoulders? — and begins this “I’m going to kick your tail feathers” kind of march into your setup. It works perfectly.

Conversely, I’ve had him come over the hill, see that plastic strutter, slick down and skedaddle before I could even blink. Roll the dice; take your chances. But the better you know the birds you’re hunting, the more prepared you’ll be to set the right decoy or decoys … if you set anything at all.

No decoy at all

Which brings me to this: No decoy.

Sure, he can hear you (or the sweet-talking hen he thinks you are), but he can’t see you. So he comes closer. And closer. And closer. He’s hunting for that little girl turkey making those soft yelps and purrs. He’s looking for you — never stopping but to quick-strut every now and again. And that’s exactly what you want; you want him to come to you.

So again, roll the dice. Set it out or leave it in your vest. It’s going to work, or it’s not. Either way, watch … and learn. Maybe you’ll get it right the next time. Maybe. That’s why they call it “hunting.”